Jacquard weaving designed by the artist with coloured warp threads (materials of the threads are acrylic, cotton) 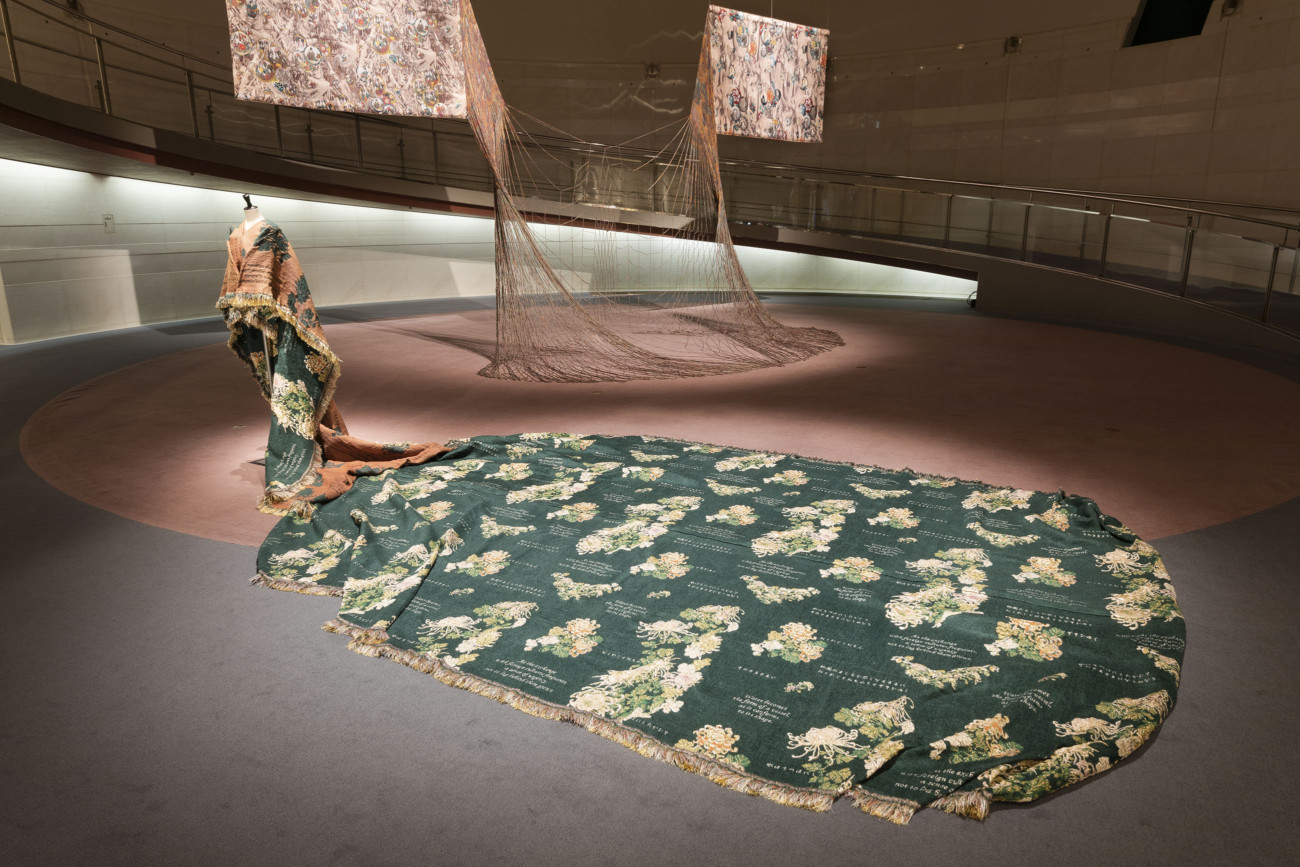 Front and back, toing and froing
In 1869, Japan finally ended over 200 years of self-imposed seclusion. In order to show that Japan was equal to its Western counterparts that were, at that time, the center of the world, the Meiji government adopted various Westernization policies, lending itself to the values of Western Europe. In order not to be treated as inferior or to be colonized, rapid Westernization was carried out with utmost urgency, which included reforming the system of government and abandoning traditional fashion and customs. For example, following the Western custom, from 1872 onwards, Empress Shōken (Haruko) also attended ceremonies and official meetings with key figures from Western countries that the Emperor had previously appeared alone. In addition, clothing was viewed as an extension of international politics, aiming at presenting Japan as a prominent and advanced civilization comparable to the powerful European countries.

In 1873, the emperor shortened his hair and began to wear a Western-style military uniform as formal clothing. In the Imperial Court, aristocratic women had traditionally worn a casual version of twelve-layered ceremonial kimono, which had long been worn by courtiers. However, on June 23, 1886, 10 years after the change of men’s formal dress code, Minister of the Imperial Household then Hirobumi Itō notified the royal family, ministers and others of women’s new formal dress code. On July 28 of the same year, the Empress wore Western clothes, and two days later, she presented herself in Western clothes in the public for the first time. On January 17, 1887, the Empress sent out her ‘declaration statement’ to the Cabinet Ministerial Secretary, Secretary of State and Han Chinese, promoting Western clothes for ladies.

Contrary to the Emperor who persistently opposed the Westernization of women’s clothes, the Empress’ stance was characterized as her alleged remark, “for my country, I would do anything”, presenting herself as a new type of empress who was modern, progressive and flexible in the light of the rapid and radical socio-political transformation taking place in Japan then. By 1883, as part of the Europeanization policy, the Rokumei-kan Pavilion had already been completed, which provided the primary location for foreign state guests and diplomats to engage in international diplomacy, and by then, Western-style clothing had in part already been adopted by the many, which later came to be called the “Rokumei-kan style”. However, nothing had more influence on Japanese society than the appearance of the Empress being wrapped in Western clothes. The most well-known Empress Shōken’s clothes are probably the court dress / Manteau de Cour (currently held in Kyoritsu Women’s University Museum Collection), which is said to have been worn on the occasion of the New Year Morning Greeting in the late Meiji period. Allegedly, only domestic materials and techniques are used for the fabric, where large, medium and small chrysanthemums are finely embroidered on deep green velvet fabric. It seems also to testify the Empress’ quiet yet endearing wish to preserve elements of the diminishing Japanese culture in the midst of rapid and extensive Westernization.

Empress Shōken was a unique individual who actively embraced change with strong conviction and self-belief despite being at the mercy of the time. Empathizing with the situation in which the Empress was placed in relation to the Westernization of women’s clothing in Modern Japan, Tezuka attentively took apart the design of the court dress and redesigned it with the two pieces of Tanka poems composed by the Empress soon after the Westernization of women’s dresses at the Imperial Court.  Later, the design was materialized into the magnificent fabric at the Textile Museum Lab in Tilburg and has been titled Dear Oblivion (A Study of Empress Haruko). The Tanka poems read:

“Water becomes the form of a vessel, as it conforms to its shape.”
(Depending on the shapes of containers, the shape of water alters capriciously.)

What was it like inside the mind of the Empress at that time?
Although the two pieces of Tanka do not necessarily refer directly to the Europeanization policies or the Westernization of clothing, they, nonetheless, convey the senses of hesitation, anxiety, and uneasiness that she must have experienced then.